This quick stir fried Indian dish is perfect for a weekday dinner. Paneer and peppers makes a simple, yet delicious combination that cooks up less than 15 minutes!

I absolutely love paneer and eat it just about every week. Until now I’ve stick to some more traditional Punjabi-style paneer dishes – Matter Paneer (peas) which I learned from my mother-in-law, palak paneer (spinach) and creamy paneer butter masala (I’ll get around to posting those eventually too!) This paneer and peppers dish is a great new addition to the line up!

These other dishes are a bit more complex and require more cooking time to develop ntheir flavours. This paneer and peppers dish, on the other hand, uses juts a few spices and, since the tomatoes don’t need time to cook down into a gravy, it’s a breeze to whip up.

The only pain point is frying paneer. Since I eat a lot of paneer and tofu, I have some oil I keep aside for frying (I keep it and reuse a few times, straining after each use and replacing as needed). It’s actually quick and easy if you have the right tools! Add 1-2 inches of oil to a pot and heat over medium-high. When oil is glistening (or when the back of a wooden spoon pressed to the bottom of the pan releases lots of bubbles), add paneer cubes in small batches, frying until just browning (1-2 minutes).

I simply eat this one with naan or parantha (these I buy frozen so they’re always on hand). If you’ve got time, you can also make a batch of Naanotis (a cross between a roti and a naan similar to Tandoori Rotis).

I like this dish with a good amount of heat which is complimented by the mild flavour of paneer. Cooking the peppers until they’ve just begun to soften adds a nice sweetness too. 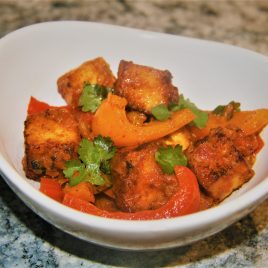 There are few things I enjoy more in life than cooking and feeding others. I'm a wife and mother and, despite spending my days working from home and wrangling now three little boys, cooking healthy and tasty meals from scratch is an important part of my everyday.

The recipes here are what we love eat - they're easy, nutritious (most of the time) delicious recipes using whole ingredients. Read more>>>